Our annual commemoration of Yom HaShoah on 11th April 2018 focused on the 80th anniversary of the Kindertransport – when Britain opened its doors to 10,000 Jewish child refugees from Germany, Austria and Czechoslovakia following the Kristallnacht anti-Jewish pogroms of November 1938.

Over 300 people witnessed the regular candle-lighting ceremony, this time performed by Kindertransport veterans assisted by children of the third generation, who also gave a series of readings. Six candles were lit to remember the six million Jews who died at the hands of the Nazis.

The principal guest speakers were Ann and Bob Kirk, who each came to Britain on separate Kindertransports in 1939. They spoke movingly about their respective experiences of antisemitic harassment and the courage and selflessness of their parents in arranging for them to join the escape route to Britain offered by the Kindertransport programme. Each described with great poignancy their farewells to their parents, whom they were never to see again. Life in Britain was difficult in the first few months, but they adapted, like so many of their fellow refugees. In Ann’s words:

“On the whole, most Kindertransport children eventually settled down happily, married and started new families. Bob and I have two sons, three wonderful grandchildren, and now a great grandson.”

Their central message was that underlying the Nazi creed was the denial of room for respecting – or permitting – difference. But, in their words, and with resonance to events in the present day:

“We need to remember that every person is an individual, with hopes, fears, ambitions, and entitled to dignity and respect.”

The other guest speaker was the Chargé d’Affaires at the German Embassy, Tania Freiin von Uslar-Gleichen. She spoke with great sincerity about Germany’s acknowledgement of its guilt for the Holocaust and its determination that antisemitism must be confronted. Others attending included diplomats from the embassies of Austria, Bulgaria, Czech Republic, Hungary, Ireland, Lithuania, Romania and Poland; the Mayor, Mayoress and Deputy Mayoress of Harrow, and several local councillors; and representatives of civil and religious organisations.

“Our commemoration focused on the Kindertransport which enabled 10,000 young lives to be saved. It is relevant for today because, once again, we see children fleeing. In 1938/39, support was organised, now there is antagonism and bureaucracy, in spite of the media stream that feeds the tragedy into our homes in real time. We give thanks for the humanity then and question its absence now.”

Eminent immunologist Professor Leslie Brent, a beneficiary of the Kindertransport, who was one of the candle-lighters, said:

“I can’t tell you how moved I was by the commemoration, quite the most telling and meaningful I have ever attended.” 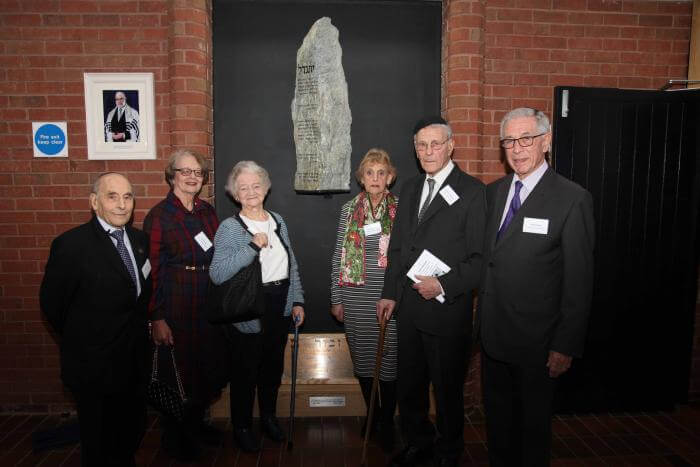