For Remembrance Shabbat 2022, Pinner Shul was covered in poppies when friends of Sonya Daniels z”l decided to knit poppies in her memory. Sonya was introduced to poppy knitting by Ruth Simons when she was unwell and sold them for charity. We were so pleased that Ruth, Jackie Silverstone and Doreen Samuels and many other friends participated in knitting the poppies and then decorating the shul. 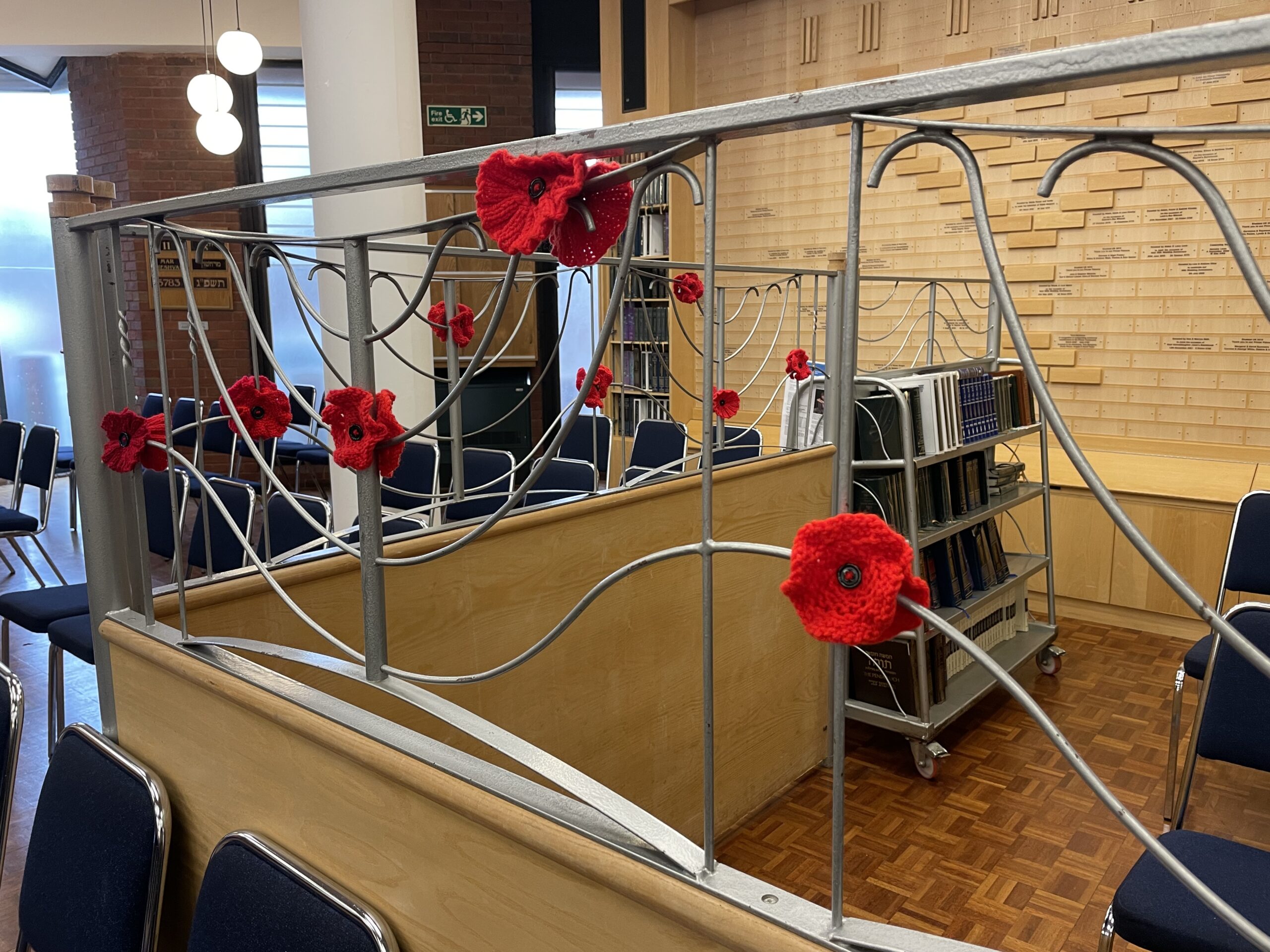 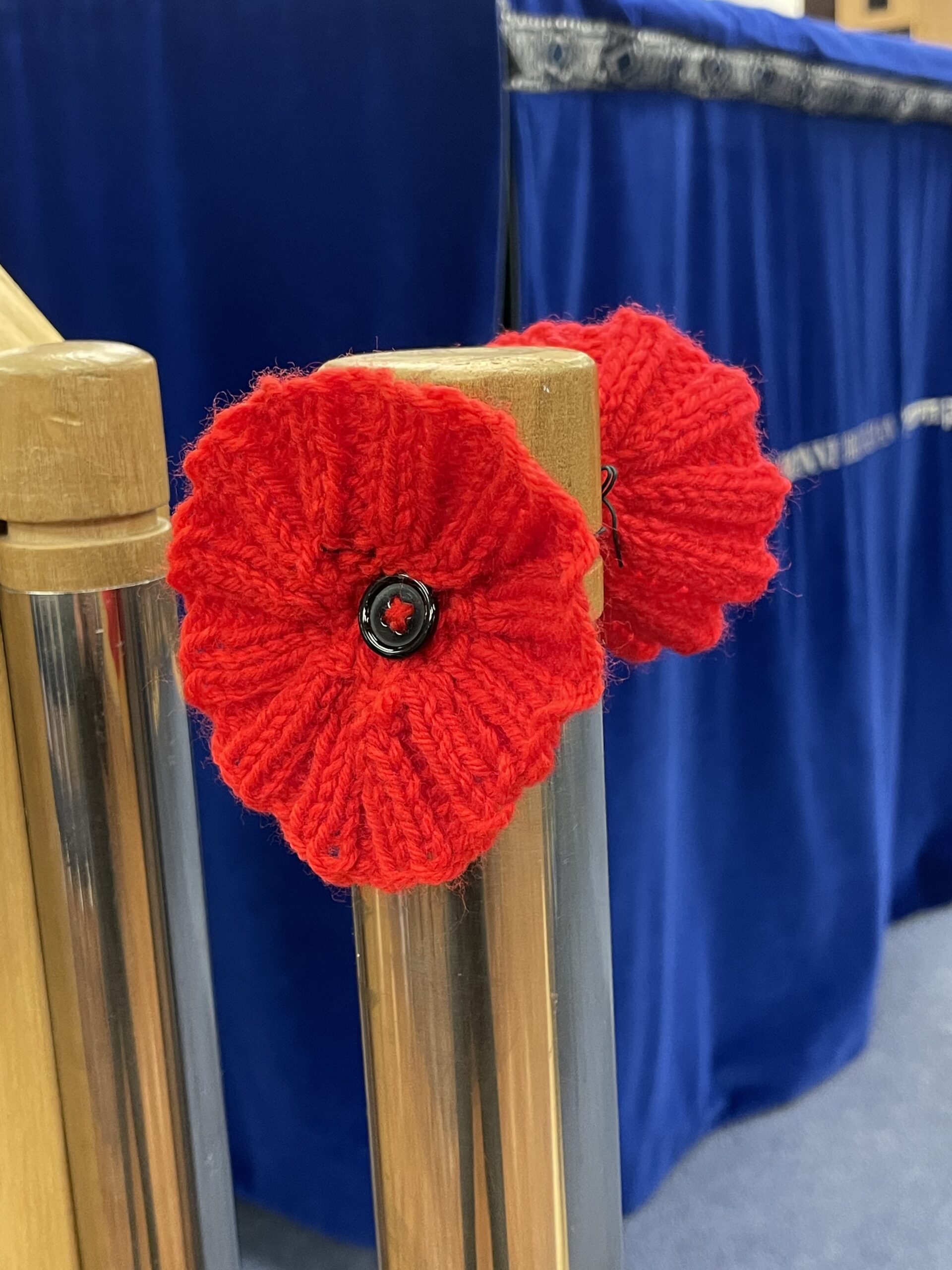 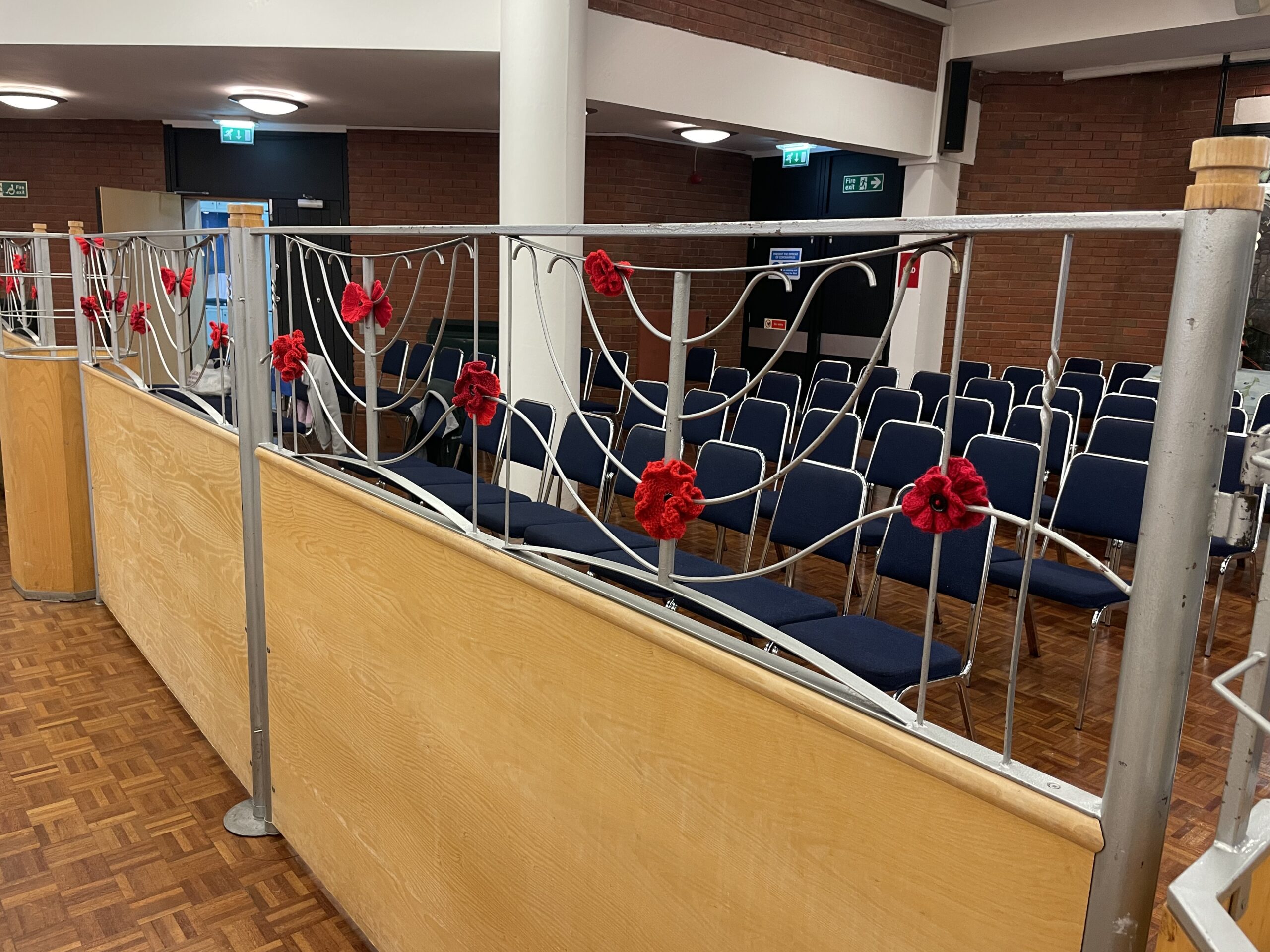 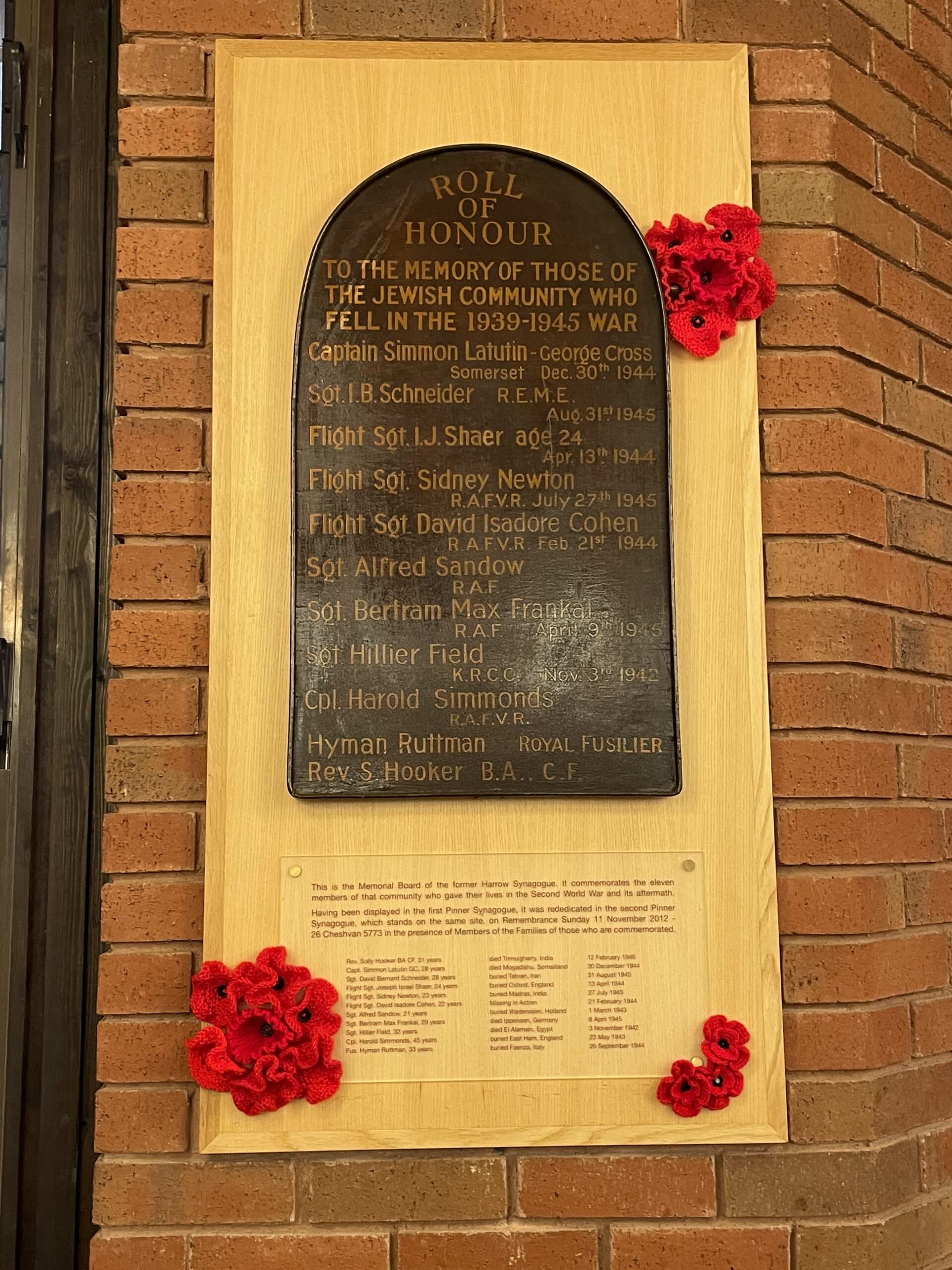 We supported the multi-faith Pinner Act of Remembrance on Sunday 13 November 2022 when our member, Stan Conway, laid a wreath on behalf of our community at the ceremony.

We are proud to have prominently displayed in our Shul the Memorial Board from the former Harrow Synagogue. It commemorates the eleven members of that Jewish community who gave their lives in the Second World War and its aftermath. 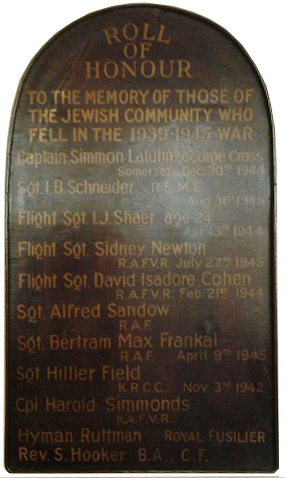 Having been displayed in the first Pinner Synagogue,  it was rededicated in the second Pinner Synagogue, which stands on the same site, on Remembrance Sunday 11 November 2012 – 26 Cheshvan 5773 in the presence of members of the families of those who are commemorated. 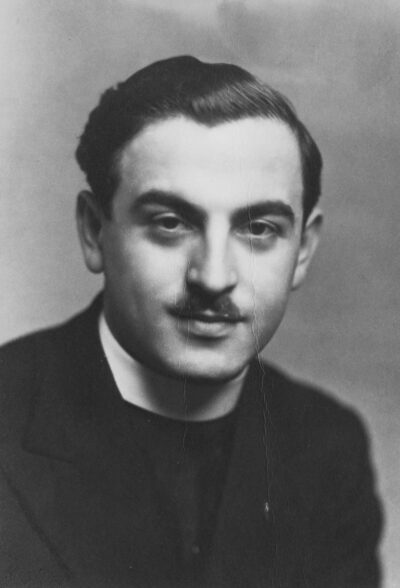 Bachelor of Arts. Chaplain to the Forces

Born in 1915 into a family from Vilnius in Lithuania, his parents were Yerachmiel (Joe) and Pesia (Polly) Hooke. Solly was, with his twin sister Frances, the third of their eleven children.  He studied at Jews’ College and at University College London, gaining a first-class Bachelor of Arts degree in Semitics.

In 1938 he married Freda Dora Hausman. In November 1939 after a period as Student Minister at the Central Synagogue he succeeded Reverend Cohen as the Minister of the Harrow Hebrew Congregation.

He walked blamelessly, worked righteously and spoke truth in his heart

In April 1942 Reverend Hooker, as many Jewish ministers, became a Chaplain to the Forces. He was posted first to Glasgow (Jewish chaplains could not be compelled to go abroad and, married with a small daughter Ruth and with Freda expecting another child, he was hardly enthusiastic to do so). However, in August 1943 the Senior Jewish Chaplain told him that three other ministers had declined for personal reasons to go abroad and asked him to consider going. Viewing this as his duty, he did so. Days after he reported in London, his second daughter Judith was born in Glasgow.

I am learning and I am strong and I am confident in ultimate success. Above all else I am grateful to God for all kindnesses towards us and for the progress that He has enabled us to make at what can still be regarded as the beginning of my life. God bless my darling wife and daughters, and may we soon experience the Grand Reunion, Peace and Love, where now is War and Hate.

In August 1945 he returned home for a short period of leave and met his daughter Judith for the first time; it was her second birthday. In September he was posted to India.

In India he began to show symptoms of illness and he was admitted to the British military hospital where, on 12 February 1946, at the age of 31, he died of natural causes.

He rests in the Madras War Cemetery. His tombstone commemorates Chaplain to the Forces the Rev S. Hooker B.A. Royal Army Chaplains Department. The inscription reads “He walked blamelessly, worked righteously and spoke truth in his heart”. 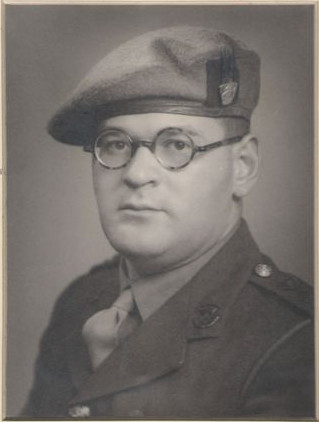 … looked up to with respect and affection by
all the men who passed through his hands.

Simmon was the son of Maurice and Freda Latutin.  He was a talented violin and viola played and, at the age of 20 years, was one of the youngest players of the London Symphony Orchestra. In March 1940 he married Margaret Jacob.   Simmon served in the UK, Northern Ireland and Mogadishu in the former Italian Somaliland where, as an acting Major, he commanded an infantry training school. On 28 December 1944 he rescued three men from an inferno of blazing rockets. All later died of their injuries, including Simmon Latutin on 30 December 1944 at the age of 28.  Simmon is buried in the Nairobi War Cemetery. The Deputy Commandant of the Somalia Gendarmerie where Simmon last served wrote “He was undoubtedly looked up to with respect and affection by all the men who passed through his hands.” 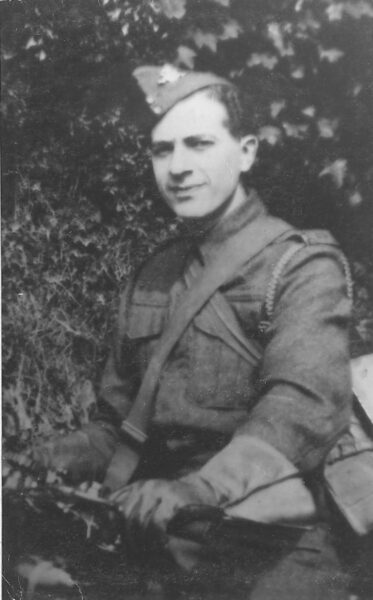 David was the son of Joseph and Minnie Schneider. He joined the Army in 1940 and initially served with the Duke of Wellington’s Regiment in Plymouth.  He was later attached to REME and a photograph suggests that he may have been a motor cycle despatch rider. He served in Palestine and Iran and died on 31 August 1945 at the age of 28. He is buried in the Tehran War Cemetery.

Joseph (also known as “Joey”) was a son of Samuel and Clara Shaer, and attended Raines Foundation Grammar School.  He enlisted in 1940.  In 1942 he trained to be a navigator and was attached to 540 Squadron operating Mosquito aircraft from  RAF Benson in Oxfordshire.   On 13 April 1944,  when returning to base, his plane crashed near Abingdon, Oxford.  Joseph was 24 years old and he is buried in the Wolvercote Cemetery, Oxfordshire.

Sidney was the son of  Barnett and Augusta Newton (formerly Nacovitch).  He enlisted on 19 February 1942,  and saw service in Southern Rhodesia, Egypt, Palestine and India.  He was a pilot, flew reconnaissance missions and delivered planes to where they were needed.  Whilst in India, Sydney was attached to the 9 Ferry Unit.  He died on 27 July 1945, aged 23 years, in Madras when his plane crashed.  Sydney was initially buried in the local cemetery at Vizagapatam and after the war he was reburied in the Madras War cemetery.

David was born in 1921, son of  Jack and Florence Cohen (later known as Carson).  David grew up in West London and the schools he attended included Bayswater Jewish Primary School.  He was a Jig and Tool Draftsman.  David  enlisted in the RAFVR on 26 May 1941 and was attached to 9th Squadron Bomber Command stationed at RAF Bardney, Lincolnshire.  On 21 February 1944 David was the navigator of a Lancaster plane which failed to return from a night mission to Stuttgart.  The crew of the aircraft, including, David, were all listed as “Missing in Action”.  David was aged 22 years.

Alfred (also known as “Alfie”) was born in 1920, the youngest of four children of  Hyman and Kate Sandow.  Alfred is believed to have worked for De Havilland aircraft as a draughtsman.  He enlisted on 11 August 1941 and served as a Sergeant Flight Engineer with 50 Squadron. On 1 March 1943, he was a member of the crew of a Lancaster bomber, on a mission to Berlin, which was shot down near Nigmegen, Holland.  Alfred was aged 22 years and is buried in a cemetery in Wadenoijen, Holland.  Alfred was the nephew of Harold Simmonds (see below) who died in Service less than three months later.

Bertram  (also known as “Bertie”) was born in 1916,  son of Leon and Augusta Frankal.  Bertram was an optician.  He enlisted on 27 March 1942.  On 8 April 1945 Bertram was the Navigator of a Halifax aircraft on a mission with 466 Squadron  to Hamburg.   His plane came under attack and crashed at Ippensen.  Bertram was 29 years.

Hillier was  born in 1910, son of Lazare and Tina Fieldcovitch.  He was Hon. Secretary of West Central Jewish Club and, later, Hackney Boys Club, and owned a tobacco shop in the City of London.   Hillier, also known as “Doll”, served in Greece, Libya, and Crete, and visited Jerusalem whilst on leave in 1942.  He was killed in action at the Battle of Alamein on 3 November 1942, aged 32 years, and was buried there.

Harold was the son of Hyman and Sarah Simmonds.  Harold was a taxi driver and he married Lily in 1923.  He enlisted on 21 July 1939, and in 1943 was serving as a Wireless Operator attached to RAF Bournemouth (part of Flying Training Command).  On 23 May 1943,  having returned from an operation, Harold and other crew members checked into the Hotel Metropole, Bournemouth, where they were billeted.  Shortly afterwards, the hotel suffered a direct hit from an enemy bomb.  Harold was aged 45 years and was buried in East Ham Jewish Cemetery.  Harold was the uncle of Alfred Sandow (see above) who had died in Service less than three months earlier.

Hyman was born in 1911, son of Woolf and Yetta Ruttman.  He ran the family business, a shop and stall in South Harrow Market.  Hyman was killed in action on 26 September 1944 in Faenza, Italy, aged 33 years and was buried in the Faenza War Cemetery.