Our Shul’s Yom Hashoah commemoration, themed on events in Romania, was an outstanding success this week, as judged by an appreciative, capacity audience from across the spectrum of the community, as well as diplomatic representatives and civic leaders.

More than 350 people filled the Cecil Park building on 23rd April to hear guest speaker Leslie Kleinman retell his remarkable story of survival during the darkest time in our history. The Romanian ambassador HE Dr Dan Mihalache also gave a poignant address to the captivated audience that included the ambassador of Switzerland, HE Dr Dominik Furgler and of Poland, HE Dr Arkady Rzegocki – as well as many other dignitaries. Since the Mayor was unwell, the Deputy Mayor and Mayoress of Harrow attended.

The 87-year-old from Romania was incarcerated in Auschwitz aged just 15 and put to work in barely survivable conditions. The audience was deeply moved to hear that at the camp his mother and six younger siblings had been gassed immediately and upon his liberation in 1945, he discovered that his one remaining older sister had recently perished.

Leslie only began speaking of his experiences following 60 years of silence because he felt compelled to educate the next generation. “The problem is that people forget the Holocaust so what I want to pass on is: do not hate anybody. Be tolerant because hate only causes hate,” he said.

Coincidentally, 23rd April is also the date that Leslie was finally liberated near Dachau by the Americans. “It’s always celebrated as a second birthday for me,” he concluded.

It is little known that an estimated 280,000 to 380,000 Romanian Jews were systematically murdered during World War II, some by German killing squads, others by Romanian troops. Indeed Romania is said to bear responsibility for the deaths of more Jews than any country other than Germany itself.

Six candles were lit to remember the six million Jews who were murdered during the Holocaust and Pinner Synagogue youth members read poems and extracts from the recently deceased author, Nobel Peace prize winner and Holocaust survivor Elie Wiesel, also from Romania. 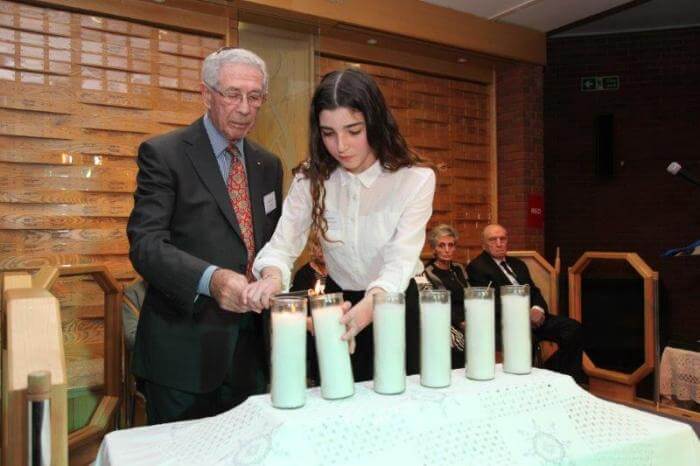