450 people, representing a wide spectrum of the local community, filled the Shul to capacity on Sunday April 7th for the annual Yom Hashoah Remembrance service, the 24th time this has taken place in Pinner.

Remarkably this year the diplomatic corps numbered 11 including the Ambassadors from the Polish, German and Albanian Embassies. The other countries, with high level representation were Hungary, Romania, Slovakia, Austria, and Czechoslovakia. Notably the head of Consular and legal affairs of the Federal Republic of Germany brought his two daughters (14 and 16) who were hosted by two members of the Pinner Youth – Jemma Green and Gabi Bernstein. Numerous Harrow councillors including His Worshipful, The Mayor of Harrow, Mr. Nizam Ismail, were present too.

The Polish Ambassador gave a short address, acknowledging unacceptable atrocities during the time of the Shoah and outlined numerous on-going efforts within Poland to recognise those who helped save Jewish lives* (i.e. Januz Koczak and Jan Karski), and to implement activities to bring some Jewish culture back into Poland. He stated ‘we build synagogues we don’t burn them’.

Two survivors of the Lvov Ghetto (Lili Stern Pohlmann and Janine Webber)  spoke about their experiences, Janine showing some harrowing photos of life inside the Ghetto and Lili extolling the virtues of her close friend Irena Sendler (nom de guerre Jolanta) a Polish Catholic, who managed to rescue 2,500 children from the Warsaw ghetto**.

Six Youth members of the synagogue, representing the ‘Third Generation’ were each paired up with survivors (5 of whom were survivors of Polish ghettos) each group symbolically lighting one of 6 candles, each candle representing one of the 6 million Jews killed by the Nazis during the Holocaust. The 6th person with the survivor group was the daughter (Karen Mantell) of the evening’s key-note speaker, Lili Stern Pohlmann, who had flown in from Miami to hear her mother speak (she had never done so before in such a setting) and further poignancy was lent to the evening with this direct generational link.

An additional interesting and moving aspect of the evening was the attendance of Jonathan Schonfeld, son of Rabbi Dr. Solomon Schonfeld. Rabbi Schonfeld, working in close collaboration with the Chief Rabbi of the Polish Forces (Rabbi Dr. Kahane) who after the War attempted to trace displaced children throughout the Poland, organised three transports of Jewish children from Poland in 1946 – Lili being on the first of these. Jonathan was introduced to the audience who gave spontaneous applause in recognition of the work done by his father.

Olivia Marks-Woldman, The CEO of the Holocaust Memorial Trust, a Pinner resident and member of the synagogue delivered the Vote-of-thanks and concluded:

We are privileged that there are friends and colleagues from non-Jewish communities who wish to show respect and solidarity with us today, and we thank all of you for joining us.  We thank sincerely the Polish Ambassador, His Excellency Witold Sobkow  for attending and addressing us.  The friendship of you all today encourages us, not only to share the memories but to do what we can to learn too about the past and how we can contribute to building the future.

* It should be noted that more Poles have been recognised by Yad Vashem as ‘Righteous among the Nations’ than have nationals from any other country.
**(The 70th anniversary of the uprising in the Warsaw ghetto was the evening’s focus. – a key reading being Anieliewicz’ Last letter) 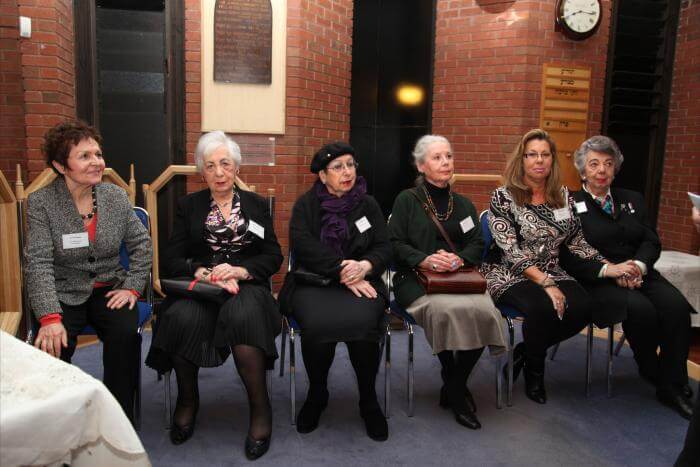